Great 8 Contender for the Ridler Award …

Willie and Charlotte Maise were on their way over to the Cobo Center Friday morning to see their 1965 Dodge Dart SL Street Touring car at the 2015 Detroit Autorama. Their pride and joy,  a 1965 Dodge Dart which they call the “Dart SL ” was to be shown to the public for the first time, and their anticipation was high. This car started out to be Willie’s driver, but when he took it to Big Oak Garage, the crew there came up with some good ideas so Willie’s driver turned into a full on show car. Every panel was reworked. The roof was lowered a bit toward the windshield and the body was totally reworked.  The finely crafted custom includes 110 body modifications, 42 one-off machined parts and countless hand-made sheet metal pieces. But the lines of the car and enough of the look of the car were saved so that you can very definitely tell it is a ’65 Dodge Dart. The fit and finish on this car are perfect.

The Dart SL has a 392 Supercharged Gen 2 Hemi motor which is the heart of the car. It sits in a perfect clean engine compartment where all of the wires and plumbing are hidden, even the radiator was built in under a special valance.

When Big Oak Garage designed in the the suspension they used a special belly pan type cover that is tied into the rear suspension and they used a torque arm type suspension in the rear. (See photo.) An air vent was used below the headlights on the front valance to bring air through a duct in the fender to the front brakes. (See headlight photo.) You can also see that the front headlights are LED.

In the photos you’ll notice the one-off Schott wheels labeled SL65’s. Willie was told by Schott that they will be selling this design sometime in the future, and they will call them SL65’s in honor of this build.

The custom interior is so fully detailed it takes a while to take in all the subtleties. The interior was done by M&M Hot Rod Interiors.

Big Oak Garage did the paintwork in-house. The D-BASF color is called Green With Envy.

Willie and Charlotte soon found out that their car had been selected as one of the Great 8 contenders for the 2015 Ridler Award. Willie said, “It’s still all just sinking in.” 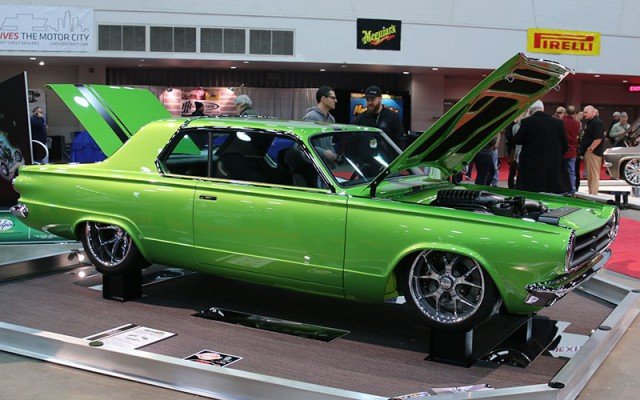