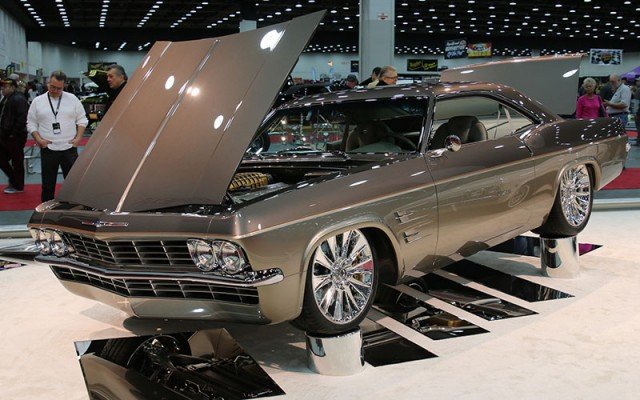 The Chip Foose 1965 Chevy Impala known as “Impastar” has won the 2015 Ridler Award. In a short awards ceremony on Sunday at the 2015 Detroit Autorama, Don and Elma Voth approached the awards podium as the proud recipients of the Ridler Award, the most prestigious award in the custom car building hobby. Their joy at winning the Ridler was complimented by the appearance of TV celebrity and custom car builder Chip Foose.  This was the fourth time that a Foose-built custom has won the Ridler Award.

We know that whatever Foose touches turns to gold. So when it became known that a Chip Foose 1965 Chevy Impala was built for the Voths who hail from Abbotsford, British Columbia, Canada, everybody surmised that the Ridler Award was in their sights. Foose had built the ’65 Chevy Impala Custom for the Voths because their favorite car was an Impala Super Sport. So why did they call it the “Impastar?” It seems that it was a play on the words “Impala” and “imposter.” Foose designed a logo for the car spelled “I-m-p-a-s-t-a-r.” The imposter reference came about when Foose used a ’65 Impala body fitted to a stretched 2008 Corvette chassis. In the photos below you will see a second white 1965 Chevy Impala which was part of the Foose display. On the second car he showed where the cuts were made on the Ridler car.

With Foose in the Great 8 it took the competition up a notch. There was already a great lineup of cars ready to compete for the Ridler this year. That level of competition provided anxious moments for all eight contenders as Sunday arrived and the awards presentation was about to commence.

The fact that the Chip Foose 1965 Chevy Impala was competing in the Radical Hardtop category is a departure for Foose. For his three previous Ridler Awards, Foose built a 1935 Chevy Master for Bob and Wes Rydell in 2002; a 1934 Mercury Stallion for Ron Whiteside, 2003; and a 1936 Ford Roadster for Ken Reister, 2005. This is the first time he has had an entry in a custom hardtop category in competition for the Ridler. However, Foose has a history of excelling at custom muscle and pro touring cars. Evidence the amazing Terracuda, a 1970 Plymouth Barracuda Custom built for the CEO of Pabst Blue Ribbon.

Click on the photos below for a larger view: