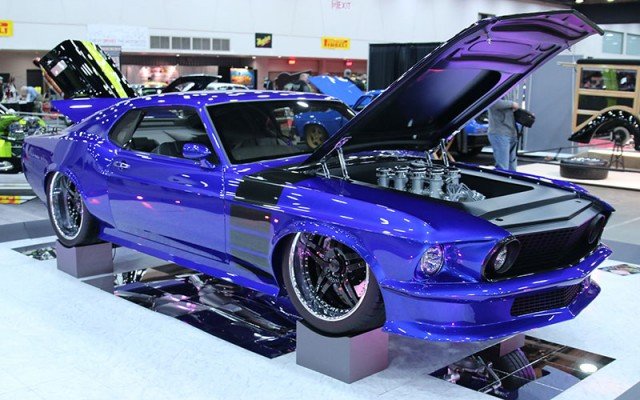 The 1969 Mustang Custom called Stampede is as edgy and contemporary a street machine as we have ever seen picked in the Great 8. There was a time when you could only win the Ridler Award if you brought a 1930’s era custom roadster to the Detroit Autorama. But this year the Stampede has entered the Ridler Award competition with 20″ wheels and complete carbon fiber body. The owner is Juan Martinez from Houston, Texas. “I bought this car five years ago with the intention of building a nice driver,” he told us. “One thing led to another, and five years later the Stampede was done.” He credited George and Tim Palazzolo of GAP Racing in Houston for making it a reality.  At the 2015 Detroit Autorama it was picked to the Great 8. It competes in the Semi Hardtop category.

When Chip Foose pulled in with his Great 8 car on Friday, the first thing he did was jump out and run over to look at the Stampede, Tim Palazzolo said. Foose observed, “I like it … nothing jumps out at me.” He was referring to the way the mods on the 1969 Mustang Custom are almost understated. You don’t notice right away how radically modified it is. All of the original steel body panels were redone in carbon fiber.

The custom PPG paint was mixed by Randy Borcherding at the Painthouse in Cypress, Texas. (You saw his green and brown custom PPG painted 1947 Hudson Pickup at Goodguys and at the Grand National Roadster Show.) He called the color Super Blue and it will be sold as a featured color by PPG sometime in the near future, Randy told us.

When you have Boss Stripes you should have a Boss engine and this one does. The Boss 572 ci motor is “crazy loud,” says Palazzolo. He says it was dyno’d at 900+ hp, but Palazzolo says he wasn’t pushing it. It will do a lot more.

Interestingly, the interior upholstery has no visible stitching. Palazzolo told us he wanted something that no one had ever seen before, so he worked with Compton Custom Interiors out of Ft. Worth, Texas to hide the stitching. Look at the photos.

The 1969 Mustang Custom called Stampede uses Air Ride shocks with magnetic ride, tubular front suspension and torque arm rear suspension. The wheels are 20X10 front and 20X12 rear. The wheels were designed by Jason Rushforth, a California designer who is getting very popular.