CARMEL, CA — The confetti has flown and this year’s Best of Show at the 2105 Pebble Beach Concours 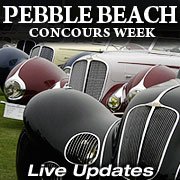 d’Elegance has been chosen. In the midst of the tension and excitement here at the Pebble Beach Golf Club, a 1924 Isotta Fraschini Tipo 8A Cabriolet, an elegant gentleman’s sport touring car, has been chosen the Best of Show for this 65th Annual Grand Concours. The proud owners are Jim and Dot Patterson of Louisville, Kentucky.

Here are some of the photos captured at the event by Bob Boberg of eClassicAutos.com for our Cars On Line readers. The Italian made 1924 Isotta Fraschini Tipo 8A Cabriolet was coach built on a 145-in chassis for show competition in the early 1930’s in Europe. It was recently restored to this condition just in time to be shown here at the 2015 Pebble Beach Concours d’ Elegance.

Click here to read the full story on the 2015 Pebble Beach Concours d’ Elegance as well as see photos of all the top awarded motorcars.

The afternoon judging at the 2015 Pebble Beach Concours was hardly over when the Gooding & Company Auction got into full swing. And they did not disappoint. A 1961 Ferrari 250 GT SWB California Spider

This was not the top sale of the week however. Click this link to view all of the auction action and see the prices as Bob Boberg and his wife Donna covered Concours Week here at the 2015 Pebble Beach Concours.

One of the pre-concours events is the Tour d’ Elegance. All of the judged cars that will compete in the concours are required to complete the Tour before they are judged. Click the video window below to see some of the cars coming into Carmel, California at the end of the Tour:

The world’s grandest car event is held here on the 18th hole at the Pebble Beach Golf Links. It is the culmination of a week-long festival of events and collector car auctions like you have never seen before in your life. We’ll attempt to give you a little taste of what this event is like. Follow this page all weekend as we update with photos and fast facts about the auctions and action from Monterey’s weeklong auto extravaganza.

These cars make the difference when both black-tie bourgeoisie and baseball cap crowned gearheads stand shoulder to shoulder craining their necks to get a look. Click here to see photos from the Pebble Beach Tour D’Elegance as historic cars arrived back at Pebble Beach after their tour.

On Friday evening a black 1970 Plymouth Hemi Cuda Convertible crossed the auction block at the Mecum Auction in Monterey. The official sales price was $2,250,000 before commission. It  was the top sale for Mecum tonight as the Monterey Auctions are underway here during Concours Week in the buildup to the Pebble Beach Concours d’ Elegance on Sunday. Cars On Line will be on hand to bring you the action all weekend in photos and video from the Monterey Penninsula. Here is a link to the results of the Pebble Beach Concours Week Auctions.

Here are some highlights from the 2015 Pebble Beach Concours and the big sales here at Monterey’s Concours Week Auctions.

An estimated 1,100 cars were sold here last year so you can bet there will be lots to see. Bob reported that prices at the Mecum Auction, RM Auction, Gooding & Company and Bonhams Auction were up markedly last year. We counted over 110 cars sold for over seven figures here last year.  It was after this show last year that we noticed the collector car market really took off. Prices were escalating on high end classic Ferraris and rare vintage cars and that trend has carried through to today. What will happen this year at Monterey? We’ll know very soon. Stay tuned to this page for all the relavant news.