Here at the Grand National Roadster Show they just announced that the winner of the America’s Most Beautiful Roadster trophy for 2016 is a 1932 Ford Highboy Roadster owned by Darryl Hollenbeck. The award, which is the West Coast equivalent of the Ridler Award, was presented to Hollenbeck as the final trophy presentation here at the Grand National Roadster Show at the Pomona Fairplex in Pomona, California. Over 500 show cars were on display here at the Fairplex. Hollenbeck’s ’32 Ford was chosen out of a group of 13 top contenders as the 2016 AMBR winner.

The OD green color reminds everyone of the military. It’s part of the “old school” charm of the 1932 Ford Roadster brought to the show by Darryl and Terri Hollenbeck of Concord, California. Cory Taubert, Dan Webb and Darryl built the car using a Brookville all-steel body. The chassis work was done by Dan’s Webb Automotive Art with Cory’s help. Darryl did the custom mixed PPG paintwork himself. The interior and top were done by Sid Shavers. Sherm’s Plating and Advance Plating were used to do the chrome. Bill Ganahl and  South City Rod & Custom did the final assembly. Here are detailed photos of Hollenbeck’s ’32.

The competition for the AMBR award was “brutal” this year as a field of 13 contenders was chosen. This is what they call a “Rerun Year” where some of the top runners-up from former years have been invited back to compete again. Here are the other 12 cars. 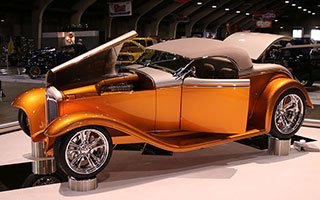 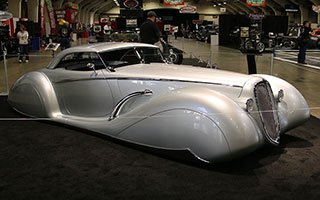 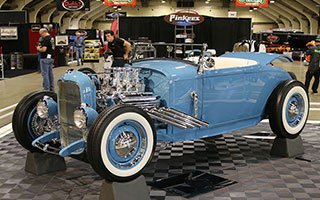 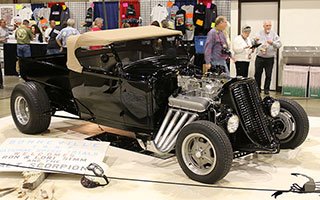 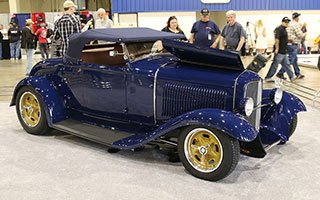 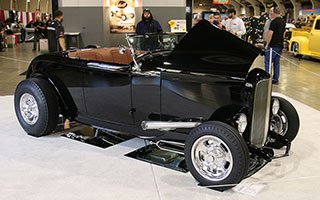 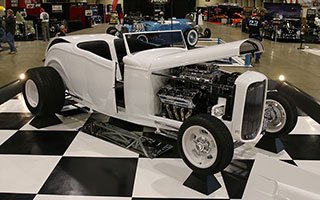 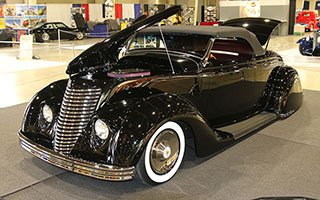 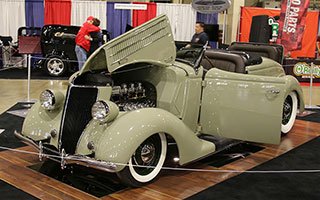 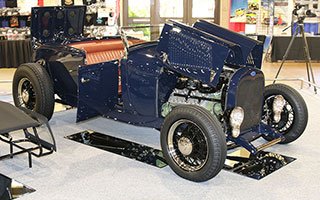 Follow this link to see over 100 photos of the 2016 America’s Most Beautiful Roadster and the runners up with build stories and history.

There were 500 hundred other show cars at the Grand National Roadster Show for 2016. The AMBR award is just one of hundreds of trophies which were handed out. Our favorite was a 1956 Lincoln Continental Mark II owned by David Hoekstra of Lake Havasu City, Arizona. The build was done by Sic Chops, and was entered in the Radical Hardtop Class. We’ve never see anything like it before at any show. 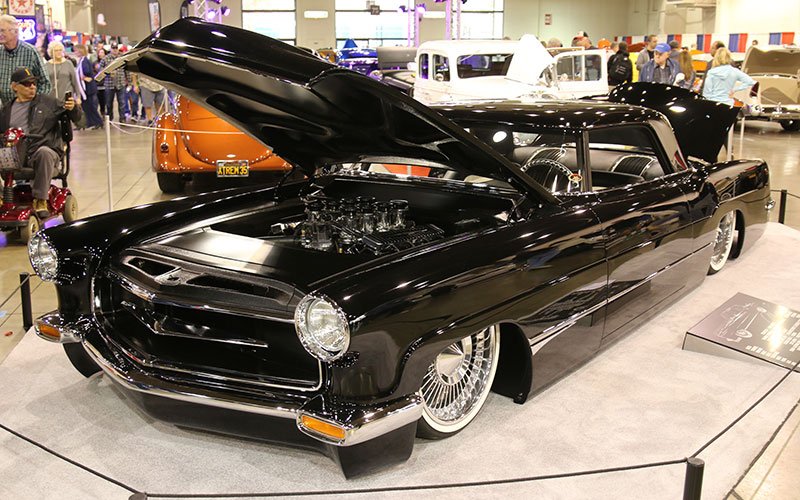 Click here to see more photos of the 1956 Lincoln Continental and other top cars in their classes.

A new exhibit was sponsored by SEMA, Specialty Equipment Market Association, the trade association for the hot rod and racing hobby. Their display was an exhibit of historic racing vehicles, with an emphasis on salt racers, many of which were record holders at the Bonneville Salt Flats.

This (above) was a display for the 2014 Ferguson Streamliner, part of the SEMA sponsored SCTA Land Speed Racers exhibit at the Grand National Roadster Show this past weekend. Follow this link to see some of these historic speed racers.

Cars On Line.com covered the Grand National Roadster Show in Pomona, California this weekend to give our readers a first hand look at all the action at the Fairplex. The show ran January 29-31, 2016. It is the nation’s largest street rod show, where all the top builders in the country compete for the coveted America’s Most Beautiful Roadster trophy.  Cars On Line.com readers had to opportunity to tell everyone what their choice was on our Facebook page. They voted for their choice for the America’s Most Beautiful Roadster winner with their “Likes.”