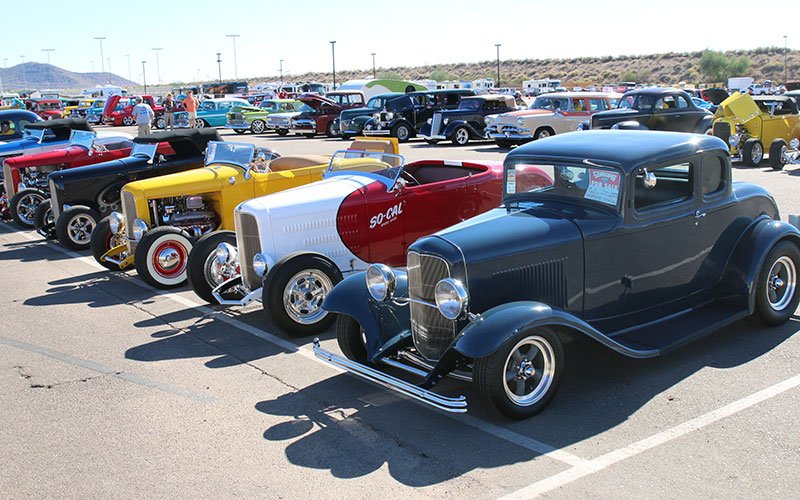 During the 2016 Goodguys Southwest Nationals this afternoon, a young Gilbert, Arizona couple had the thrill of their lives. Their ticket number was announced identifying them as the winner of the 2017 Goodguys Giveaway Car, a 1963 1/2 Ford Galaxie Custom built for Pro Touring. Leila Crupi could not stop screaming for joy as her husband Chris signed the acceptance form from Goodguys. Chris told us he has been a Ford Galaxie collector for years. The award could not have gone to a more fitting couple.

As the 19th Annual 2016 Goodguys Southwest Nationals came to a close this afternoon, Goodguys’ Grand Finale was in all measures one of the best major events in Goodguys’ history. The final Goodguys event for the 2016 car show season was held here in Scottsdale, Arizona, November 18-20, 2016. It is fair to call it “the biggest and the best” Goodguys show of the year. This is the show where all of the award winners for the past year are invited to soak up a little Arizona sunshine. Click the video window to see a snippet of the action:

As always, Cars On Line is here to cover all the exclusive action. You can view our photos and videos on our Facebook, Twitter and Instagram pages. Below,  see the 2016 Top 12 Cars and Trucks of the Year. They are sponsored by Meguiars.

Over 3,000 rods, customs, classics, muscle cars and trucks, 1972 and older, were registered to display on the show grounds at Westworld in Scottsdale (on the outskirts of Phoenix.) Here is a look at some of the cars in contention for the Southwest Nationals this weekend. See a video of the awards ceremony on our Facebook page.

Duel in the Desert at 2016 Goodguys Southwest Nationals …

Danny Popp of Cincinnati, Ohio won the Duel in the Desert today at the 19th Annual 2016 Goodguys Southwest Nationals. For most of the afternoon, Scott Fraser’s aluminum bodied 1966 Shelby 427 Cobra was turning in times a full second faster than Popp and his other competitors. But on the final run with Popp and Fraser competing for first place, Popp ran a 63.859 while Fraser ran a 63.9. It was that close. Popp wins a $3,000 cash prize.

Here is a video of the final round of the Goodguys Autocross Shootout during the 2016 Goodguys Southwest Nationals. It’s called the Duel in the Desert, and today it surely was:

All the top Autocross winners for the 2016 Goodguys Car Show season were invited to be here today. These cars have all won major Autocross events during the year. They were here today to win the biggest cash award of the year. But it wasn’t about the money. It was an intense competition to gain the title of Autocross Champion of the Year.  Here are some to the top cars in the Goodguys Shoutout here in Scottsdale on Saturday:

Of the top Pro Class drivers from previous Goodguys events this year, all the winners were invited to the big “shootout” wild west style.  Former winner Danny Popp, Detroit Speed’s Ryan Matthews and Scott Fraser, whom you met last week in Pleasanton, were all here to compete. Two-time Indy winner Al Unser, Jr ran his 1970 Camaro in the Autocross as well. This one was worth watching.

Goodguys Rod & Custom Association is one of the premier car show promotions companies in the U.S. Their 2016 Goodguys Southwest Nationals is the final show of the 2016 car show season. It is an event every Goodguys member wants to attend because you can’t turn around here without bumping into another 2016 winning show car. But don’t worry, if you can’t make it to the show in person, you can follow all the action here on this page.