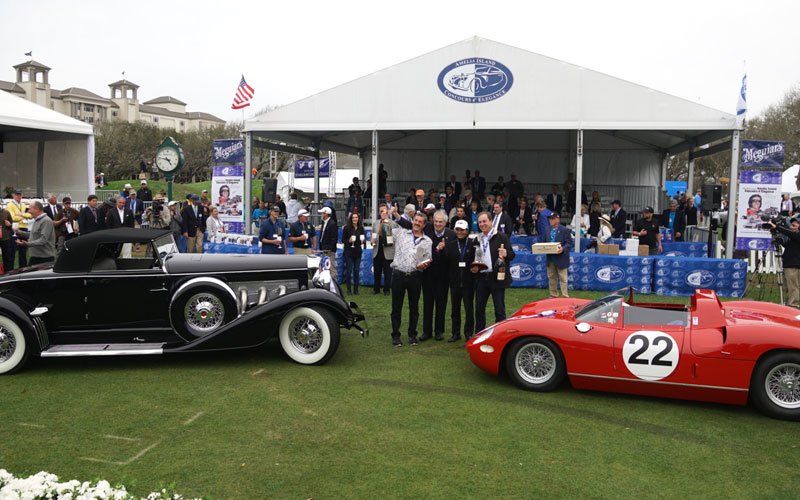 Follow this link for a close-up look at the two Best of Show winners, including photos and history.

Earlier in the week it was announced that the Amelia Island Concours D’Elegance 2018 had been rescheduled to Saturday afternoon from the original Sunday afternoon starting time.  The world reknowned event was rescheduled due to impending storms which will hit the area tomorrow. It is the culmination of a multi-day series of programs and collector car auctions here on Amelia Island, March 8-11, 2018.

The Amelia Island Concours D’Elegance is the biggest event of its kind on the East Coast, and rivals the pomp and circumstance of legendary events such as Pebble Beach and the Meadowbrook Concours scheduled for later in the year. Here is a video of the event as captured by Cars-On-Line’s photojournalist Bob Boberg of eClassicAutos.com:

The show, starting on Friday and running through Sunday, is a world class exhibition of automotive history. There were over 300 rare vehicles from collections from around the world in 2017. Most of the activity revolves around The Golf Club of Amelia Island at Summer Beach and The Ritz-Carlton Hotel complex.

To celebrate the atmosphere here at the Amelia Island Concours D’Elegance, RM Sotheby’s held an auction sale of fine motorcars. This was the 20th annual sale here at the Amelia Island Concours for RM Sotheby’s and they just announced that they sold $27.7 million worth of cars here.  Rescheduled to Friday because of the impending weather forecast, the RM Sotheyby’s sale was complemented by its livery of incredible collector vehicles. Here are the cars we followed at the RM Sotheby’s Auction.

A very rare 1966 Ferrari 275 GTB Long Nose Alloy edition was the top sale of all the auctions this weekend. To appreciate what an incredible sale this was, you have to unerstand that the Ferrari was an actual “barn find” having been just discovered after over 27 years in storage. Still, collectors were in a frenzy to get their hands on it. The selling price was $2,530,000 (including the sales commission.) As we anticipated, the Gooding & Company Auction had some of the finest cars for sale here on Amelia Island. Follow this link to review the top sales here at the Amelia Island Concours this week.

On Thursday Bonham’s Auction Company saw some of the most valuable motorcars in the world sold off of their auction stage. What a blend of vintage motorcars, race cars and American classics. Click this link to view more of the top sales for the Bonham’s Auction on the auctions page.

To set a lighter mood, there were a number of special displays along the showfield here at the Amelia Island Concours D’Elegance on Saturday. The crowd favorite was a collection of cars designed by Ed “Big Daddy” Roth, the creator of weird artwork and Saturday morning cartoons. Many of us grew up with his art. Here is a look at some of his automotive stylings:

Cars-On-Line.com was on hand to capture all the action this weekend for our readers so you can get the experience almost as if you were here yourself. You can also follow our posts on Facebook and Twitter. The highlight of the show weekend was the announcement of the 2018 Amelia Island Concours D’Elegance Best of Show awards on Saturday afternoon. Follow this link to see which cars won the top awards at the Amelia Island Concours D’Elegance for 2018.