Sunday, March 3, 2019 – Detroit, MI — It was a poignant moment at the 2019 Detroit Autorama when the brother of Steve Barton accepted the Ridler Award. The owner of the 1959 Cadillac Nomad called CadMad never saw it completed. When Craig Barton accepted the award for his brother posthumously he told the audience at the Ridler Award ceremony that his brother’s last words to him were “I want you to finish the car.”

Only a few select car builders will ever experience the feeling of accomplishment in building a Ridler Award winner. Jordan Quintal II, owner of Super Rides by Jordan, told us on Friday that he had come to Detroit to win the Ridler Award for Steve Barton to honor his memory. Jordan Quintal II and his son, Jordan Quintal III, have worked on this car for sixteen years. It was a monumental task to build. But he was convinced the 1959 Cadillac Nomad would win in spite of the incredible lineup of top cars competing for the award this year. It was no small fete as the Ridler Award is the most coveted award in the custom car hobby. His determination to finish the car for his friend Steve paid off tonight when Super Rides by Jordan received the Builders Award as the builder of the Ridler Award winner.

The highly detailed custom CadMad 1959 Cadillac Nomad took sixteen years to build. It was Barton’s dream car. Jordan Quintal III was only 19 years old when the project was started. He says he has worked on it with his father all his life. When you consider that only 99 of the rare 1959 Cadillac Eldorado Broughams were ever built, many collectors have never seen the original of this donor car. It has features that were never available on a 1959 such as the more subtle fins that would eventually be used on the 1960 Cadillacs. A Pontiac Safari roof was grafted on to the roofline of the Cadillac to make it a Nomad. 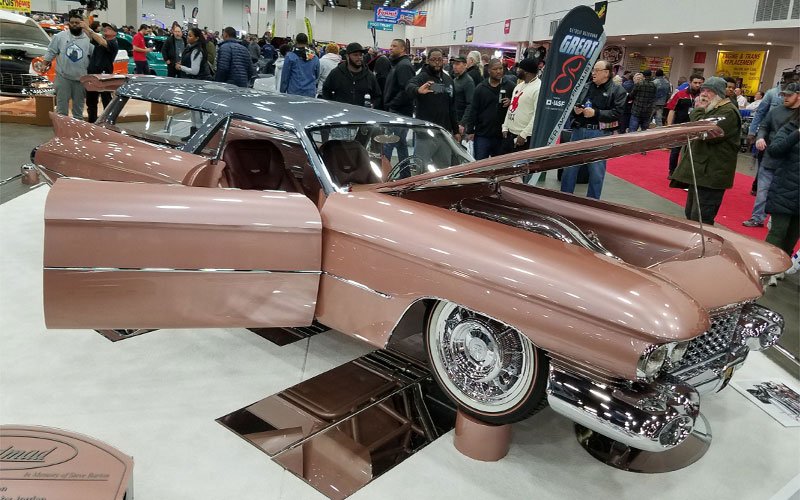 For more information on the build, follow our up close and personal story on the 1959 Cadillac Nomad they call CadMad including a video interview with Jordan Quintal III.

Not long after the 2019 Detroit Autorama opened to the public on Friday they began putting up the Great 8 standards in the displays of those cars judged as the top contenders for the coveted Ridler Award. The famous Ridler Award originated here at the Detroit Autorama to honor Michigan Hot Rod Association founder Don Rider.  In order to compete for the Ridler Award you first have to be picked to the Great 8, as the run for the Ridler is narrowed to eight contenders. Then over the weekend the top eight cars are judged.

Here are the Great 8 contenders for the Ridler Award for 2019.  (Click on any photo to read story and see video interviews.)

The 67th annual Detroit Autorama is sponsored by Meguiars and presented by O’Reilly Auto Parts. Every year it is  hosted by the Michigan Hot Rod Association (MHRA).  This weekend the MHRA’s 2019 Detroit Autorama captured the attention of the American hot rodding world.

Cars-On-Line.com’s car show team was here in Detroit to cover the Great 8 contenders and the announcement of the Ridler Award winner. We hope you enjoyed the competition. Bookmark this blog page to record this historic event. You were there as the top custom car builders in the country squared off for a chance to win the Ridler Award here in Detroit.

Couldn’t make it to the show this year? Photo-journalist, Bob Boberg of eClassicAutos.com captures the look and feel of the show for you here in this video. (Click the video to view.)

Sometimes we put so much weight on the importance of the Ridler Award that we forget that there were over 800 cars on display here at the Cobo Center during the 2019 Detroit Autorama. Cars are entered in all 50 class categories. The winners of those categories are judged and awards are given for the top cars in each category.  Here are some of our favorites so far this year:

The Detroit Autorama has been running annually for 67 years and is the feature event of the Michigan Hot Rod Association.