By Sunday, there were already over 10,000 collector cars and trucks in downtown Reno, Nevada for the final Hot August Nights 2019 cruise. The big parade down the strip in Reno drew lines of cars which were never ending. If you own a collector car, this is where you get your “fifteen minutes of fame.” The cars are the stars, and thousands of spectators were lined along the strip in downtown Reno to remember the car culture in America.

Cars-On-Line.com is covering Hot August Nights 2019, August 6-12, 2019 here this weekend. Wow! It’s like we stepped back into the 1960’s all over again. We are here at the world’s biggest car show. Watch with us as the action unfolds through Cars-On-Line’s camera lens.

In fact, this is more than a car show, it is a tribute to the car culture here in the U.S. People come from all over the world to see it. That’s because Hot August Nights 2019 has it all: nightly cruises, show and shines, a swap meet, collector cars for sale and drag racing in the desert. Recalling the days when cars were the culture here in the U.S., cruisin’ and cars were the way we celebrated summer. Not to mention, Reno is an adult playground where every major casino has a car show on its grounds each day during this event. They say there are over $108,000 in cash awards and trophies available at the Casino shows throughout the Reno and Sparks area this week. Show ‘n Shine in Reno can pay off.

Here is what we saw this week in Reno and Sparks, Nevada as the 33rd Annual Hot August Nights car show invaded this desert town.

Saturday afternoon the awards committee announced the winner of this year’s Hot August Nights Cup Award was the 1965 Chevelle Custom built by Mike Goldman Customs in Meridian, Mississippi. Owner Sonny Freeman of Lafayette, Louisiana and his wife, Debbie, were on hand to accept the award. The Builders Award also went to Mike Goldman Customs, with Mike Goldman and his wife and son, Talbert on hand to accept the Builders Cup. Freeman said his Chevelle was built the way Chevrolet should have done it back in the day. He calls the car “Reflections.”

A crowd of hundreds packed the square at 4th and Virginia streets in downtown Reno on Saturday for the awards ceremony. Here is what they saw.

The Hot August Nights Cup Award tophy is becoming one of the most coveted awards in the custom car hobby. In the last decade, the city of Reno has been able to get the sponsorship to give big cash awards for the top cars to show here. That has attracted some of the top custom cars in the country to this show. Two of the cars in this year’s Hot August Nights Cup Award competition were Great 8 Award winners at Detroit Autorama.

Cars-On-Line.com is here recording photos and videos from Reno’s famous car show. You’ll see some of our posts here on this page, with updates in real time. Be sure to bookmark this page to enjoy Hot August Nights 2019 through our camera lens, just like you were here yourself. I’ll bet by the end of the weekend, you’ll have this show on your bucket list for next year.

Cruisin’ happens every night during the week-long show. Click the video window below to view Cruisin in Dowtown Reno along with a mix of fun in the desert sun.

There’s nothing like cruising at Hot August Nights under the famous Reno arch as thousands of people crowd along the streets to get a look at all the cars. 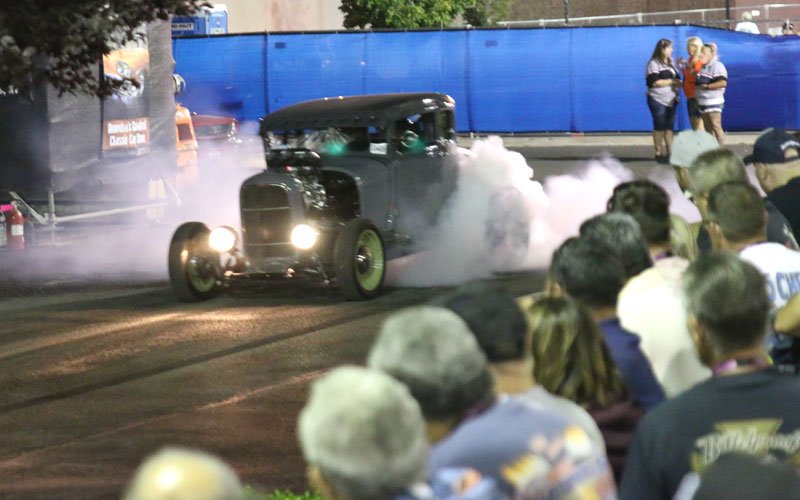 Remember Friday night drag races? Well, here in Sparks, Nevada they still remember the Friday night ritual. Nightly drag races are part of the show at Hot August Nights. Registered show participants can make passes at the track each night during the week-long car show. Here is what you’ve been missing: