When the 1932 Ford Muroc Roadster arrived at the 2020 Grand National Roadster Show its owner was in hopes that it could be chosen as America’s Most Beautiful Roadster. The award is one of the most coveted trophies in the custom car hobby. So when the presentation came this evening Monty Belsham of Houston, British Columbia, Canada was on pins and needles. That was the moment he will be remembering for a long time. His flamed Muroc Roadster will go down in history as one of America’s Most Beautiful Roadsters.

The Muroc Roadster was one of the original Kugel Highboy roadsters built by Jerry Kugel. When Belsham bought the car some time back he took it to Squeeg’s Kustoms to put his personal touches on the car. Tonight it is among the most famous ’32 roadsters of all time.

Monty Belsham’s 1932 Ford Roadster is called the ’32 Kugel Muroc No. 4. It was one of the original Highboys built by Jerry Kugel. But Monte wanted some updates, so he went to Squeeg’s Kustoms to make his dreams a reality. Metal fabrication was by Marcel’s Custom Metal. Gabe’s did the custom interior. (Vote for this roadster with your “Like” on our Facebook page.)

If you live on the West Coast, you grew up following the Grand National Roadster Show. To Californians it is the greatest car show in the country. The 71st annual, 2020 Grand National Roadster Show is being held at the Fairplex in Pomona, January 24-26, 2020. It is the longest running car show in America with deep roots in the American custom car hobby. Many say California hot rods lead the way in custom car technology. That’s why this show is so important every year.

Cars-On-Line.com will be exploring the custom car displays in the seven auditoriums on the Pomona Fairplex grounds as we bring our readers up close and personal with the cars and the builders. Follow our Facebook posts all weekend to find our most recent updates.

Every year the America’s Most Beautiful Roadster award, one of the most important awards in the custom car hobby, is presented to the owner of the best roadster here at the Grand National Roadster Show. The AMBR trophy is equivalent to a West Coast version of the Ridler Award. It is one of the most coveted awards in the street rodding world. The best builders in the country are represented here, and to be shown at the GNRS can establish your name brand in the industry.

The contenders for the AMBR award were announced here on Friday morning. Here are the other top contenders for America’s Most Beautiful Roadster for 2020:

When Danny Eichstedt had the idea of building a “Low Cut” radical 1915 Ford T-Roadster, the idea was too over the edge for some.  But Walter & Thenia  Sigsbey of Los Angeles believed. So they built this radically low custom T-Roadster they call “Leg Show T.” The interior (look at the custom steering wheel) and top were done by Ron Mangus. The Jag rear end was by Curt Hamilton. (Vote for this roadster with your “Like” on our Facebook page.)

Vying for the 2020 America’s Most Beautiful Roadster title at the 2020 Grand National Roadster Show this year is Gary & Deborah DeVine’s 1932 Ford Roadster Pickup called War Paint. It was built by Denny Lesky and his Indiana Hot Rod Shop and Dave Shuten from Galpin Speed Shop. The PPG Envirobased paint was by Hot Dog, and all the chrome was by Advanced Plating. (Vote for this roadster with your “Like” on our Facebook page.)

When the media preview got started this morning this 1932 Ford Roadster called “Lil Evil” was being evil. Mike Dwight of Gilroy, California, is the designer and builder. But today his team was working overtime to get the car ready for the show with some last minute adjustments. The sheet metal is flawless, done by Dominator Street Rods. Roy Brizio helped with the chassis. Upholstery was by Sid Chavers. (Vote for this roadster with your “Like” on our Facebook page.)

The Brownstone Roadster was entered here at the Grand National Roadster Show to compete for the America’s Most Beautiful Roadster competition. There is no doubt that this is an elegant build. Owners Tom Firth & Jodi Lant from Saskatoon, Saskatchewan, Canada, are hoping their entry will win the giant 9 1/2-foot trophy. It was built by Stokers Hot Rod Factory. (Vote for this roadster with your “Like” on our Facebook page.)

The altered track nosed Ford is a tribute to the early days of racing. This 1927 Ford Roadster they call “Ivy Reed” was built for owner John Ivy of Azusa, California. It was built by JMS Racing and Schraders Speed Shop. The track nose fabrication was by Luc Delay. Stitching was done by Rogellios Auto Upholstery. (Vote for this track nosed roadster with your “Like” on our Facebook page.)

This roadster began to come to life when Shun Kasai brought back a Deuce frame rail to Japan in 1989. Ken Katashio had the dream of building his own Deuce Roadster. He began to assemble the parts for his life long project. He acquired a Rod Bods body, Dearborn Deuce fenders, some Hallibrand parts, and more. But when Ken passed away in 2015, his friends decided to finish the car and show it as the Grand National Roadster Show in his honor. Here is Ken Katashio’s 1932 Ford Roadster. (Vote for Ken Katashio’s roadster with your “Like” on our Facebook page.)

The 1934 Ford Roadster owned by Brandi Laird of Bear, Delaware is an elegant resto rod with an interesting theme. They call it “Lady Laird Lincoln V-12” because of the incredible Flathead Lincoln V-12 which was prepared by H&H Flatheads. They are specialists in Flathead Ford engines, combining old time engines with modern day technology. The car was built at Adams Hot Rod Shop in Rydal, Georgia. They used an American Speed body, and Chad Adams was involved in the metal fabrication, bodywork, paint and interior. Just look at that engine compartment. (Vote for the Lady Laird Lincoln with your “Like” on our Facebook page.)

The 1932 Ford Roadster owned by Gary Mower from Big River, California was one of the more visually stunning contenders for this year’s America’s Most Beautiful Roadster award. Paint and fabrication were completed by Showtime Rod & Kustom. The interior was done by Ron Mangus. (Be sure to click to vote for the Mower ’32 Ford with your “Like” on our Facebook page.)  Of the America’s Most Beautiful Roadster contenders, this 1927 Ford Roadster is the most interesting. Owners Dustin & Dawn Smith were harking back to the old days of street rodding. With machine turned metal panels, this early hot rod look had the most character of any of the entries. The motor is a 226 ci 6 cylinder. They call the car the Twin Fan Special. It is built with a ’27 body sheel and a ’39 Ford transmission. The rear end is a Quick Change. (If you want to show your support for the ’27 Ford Roadster click “Like at the link on our Facebook page.)

The AMBR Award trophy itself stands nine-and-a-half feet tall and was designed to be the largest custom car show trophy you could win anywhere. And it will pay $12,500 to the winner. That makes it the second highest payout for any trophy award in the country. Only the Ultimate Best in Show Winner at Hot August Nights in Reno, Nevada pays more ($15,000.)

On Friday, the contenders for the AMBR will have already been chosen and we’ll have all the photos for you right here on this page. So bookmark this blog to come back on Friday for the updates. Then get set to vote for your favorites on our Facebook page. Our blog will be updated in real time with video interviews and a gallery of the best cars we find at the show.

The other big award this year was the Al Slonaker Award for the top (non-roadster) show car. It was just announced that the award went to the 1936 Willys Pickup owned by  Ron and Vicki Ernsberger of Napolean, Ohio. This is a class build done by Tin Man’s Garage out of Sycamore, Illinois. The award winning truck took home a check from ARP Automotive Products for $12,500. 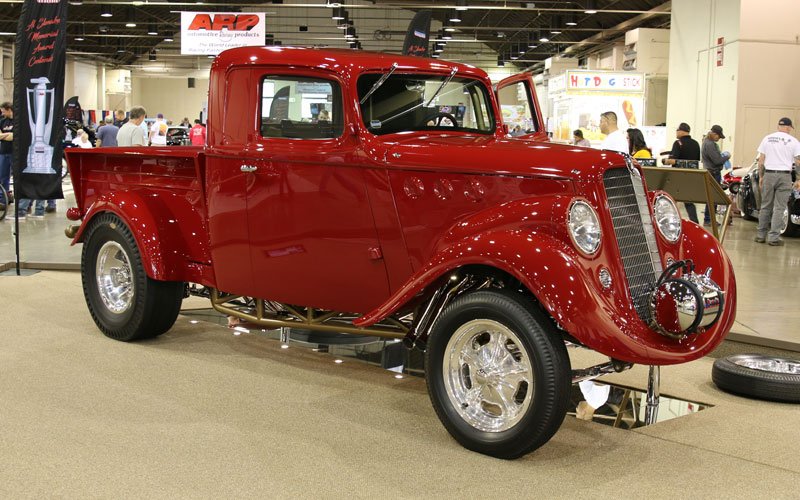 Here are all the contenders for this year’s 2020 Al Slonaker Award:

There is also a rules change for those who want to compete for the Slonaker Award this year. To qualify for the Slonaker Trophy, the custom car or truck must be a fresh build, never having been shown anywhere before.

Over 500 custom show cars will be on display here in seven exhibition buildings at the Pomona Fairplex. The top cars in the country are here to compete for a place in their class. Entries from Japan, Sweden, New Zealand, Canada and Australia will be on display. In fact, one whole building here at the Pomona Fairplex will be packed with Woodies sponsored by the Southern California Woody Club. Many of these cars you may have seen at the Doheny Wood Show or Wavecrest Woodie Show.

Here is a slider we shot today during the 2020 Grand National Roadster Show.

As a new display for 2020, a special themed building will house a “Drag Racing: Then and Now” exhibit, presented by Lucas Oil and sponsored by Cragar Wheels. It will showcase drag cars from the early days and up until today. Dragsters, Funny Cars, A/FX, Pro Stocks, Fuel Altereds, Pro-Mods, Super Gas, Wheel Standers and Jr Dragsters will be on display. Many famous drivers are promised to be in attendance.

In addition, on Saturday and Sunday, a car show wil be held outside on the grounds with another 600 to 800 local cars on display for the 15th Annual Grand Daddy Drive-In Show.