In the heaviest voting we’ve ever seen for the Cars-On-Line year-end poll, Rick Hendrick’s 1970 Dodge Hemi Challenger R/T pulled into the lead by just two votes to become the 2020 CAR of the YEAR. A popular high impact Mopar color, the Plum Crazy Challenger has the appeal to be an historic icon. And it is all because of the unbeatable 426 ci Hemi motor under the power bulge hood. It was a fitting classic muscle car to be crowned as CAR of the YEAR on the internet.

As the voting closed on Christmas Eve, the winner in COL’s 2020 CAR of the YEAR poll was the 1970 Dodge Hemi Challenger R/T, formerly of the Hendrick Performance Collection. Rick Hendrick is best known as a successful NASCAR Team owner, but his love for muscle cars dates back to his youth when he drag raced a 1930 Chevy. To qualify for our 2020 CAR of the YEAR poll, Cars-On-Line featured his Hemi Challenger R/T in their weekly newsletter in October. The feature story on the car was so popular that it was entered in the year-end CAR of the YEAR poll. Cars-On-Line asks their readers to pick the winner in their annual poll. The voting was so close that any of the fourteen cars competing for CAR of the YEAR was within just a few percentage points of winning.

In the last few days of the contest the lead changed hands several times with a 1955 Chevrolet Bel Air Nomad from Arizona and the Hemi Challenger vying for first place. At the time that the poll closed on Christmas Eve, the Nomad was only behind by two votes. Follow this link to review the participants in the poll and see their results.

The winning 1970 Dodge Hemi Challenger R/T was the featured car in the Cars-On-Line newsletter the second week in October. The Plum Crazy Hemi Challenger was one of only 150 Hemi cars produced with an automatic transmission in that first year of E-Body production. Hendrick Performance told us that it scored 211 out of a possible 221 points at the 2004 Mopar Nationals. If you are a Mopar enthusiast you will want to read our report on this car for the MyDreamCar.online blog. It includes some interesting history on the first year Hemi Challenger.

They wrote in their ad copy that it “is in absolutely exquisite condition. Every inch of the Challenger has been restored or reconditioned to a superior level.”  As a result, it achieved 211 points out of a possible 221 awarded at the prestigious 2004 Mopar Nationals judging event.

These days, Mopar buyers demand that a Hemi car have bullet-proof paperwork which will prove that it is numbers matching. This Hemi Challenger R/T came with five Chrysler Corporation broadcast sheets. (Broadcast sheet is Mopar terminology for build sheet. See a photo of the five broadcast sheets  included in the Hendrick Performance ad.) 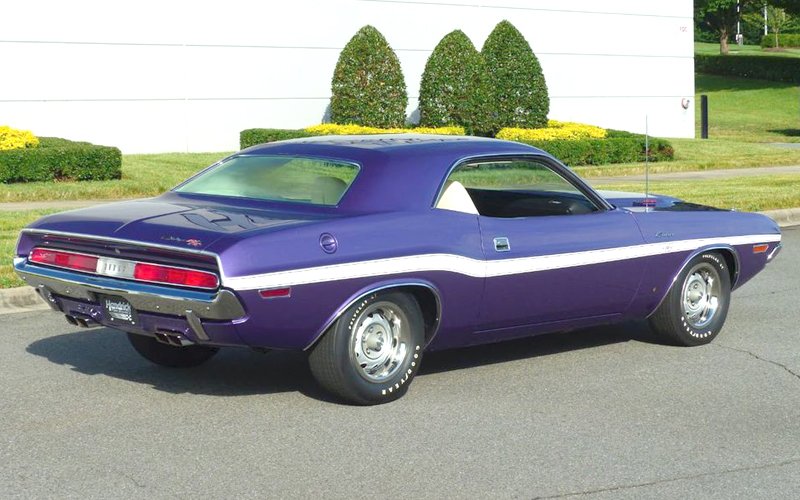 When you compare factory production numbers, there were only 286 Dodge Challenger R/T hardtops produced with the 426 Hemi engine in 1970, the first year they were offered by Dodge. Actually there were more Hemi Cudas produced than Challengers. A total of 652 Hemi Cudas were produced in that first year of E-body styling. Even sweeter, the E-Body Hemi R/T was a little longer in wheelbase, and usually came with more options than the Hemi Cuda. So the first-year E-body Hemi Challenger actually becomes more rare than the legendary Plymouth Hemi Cuda.

Chrysler’s 1970 Dodge Challenger model was an eye-grabber with a deeply recessed grille set back behind the dual headlamps. The rear lights spread the length of the rear valance. The center section of the rear lights had large single reversing lamps and the Dodge logo spread across it. The R/T came standard with the Sport Hood, a power bulge hood fitted with dual air intakes which were not connected directly to the air filter. Rallye instruments were standard on the R/T. It had a cluster containing four large equal sized pods with a 150-mph speedometer, 8,000 rpm tachometer, clock and the remaining pod containing four gauges for oil pressure, alternator, engine temperature and fuel.

The Challenger was Dodge’s entry into the Mustang-created “Pony Car” segment of the muscle car market back in the day. Introduced for the 1970 model year, it was one of two Chrysler E-body cars, the other being the slightly smaller Plymouth Barracuda/Cuda. Dodge advertisements of the day announced the all-new high-performance Challenger, quipping that ‘The Pony has a mean streak.”

Competition was fierce in the muscle car war among automotive manufacturers, and both these cars were available in a staggering number of trim and option levels as well as virtually every engine in Chrysler’s inventory. If you checked the 426 Hemi engine option when ordering a 1970 Dodge Hemi Challenger R/T you automatically got the factory Super Track Pack A34 option with the Sure Grip differential, and 8 3/4″ Dana rear axle equipped with 4.10 gears. Only 150 Hemi Challenger R/T’s were built with an automatic transmission.